What's Meant To Be, The Upside & A Race Recap!

- September 08, 2014
I have always liked the saying, "if it's meant to be, it will be." It helps me from getting to worked up over things that don't go quite how I planned.

Minus a few niggles here and there, my build into Ironman Wisconsin was going well until about 10 days before the race, when I started to come down with a sore throat and a cough. Things quickly went south and I ended up with full blown bronchitis on Monday of race week. Despite the sickness, I was optimistic that with great self care and drugs, I could get back to top form by Sunday.

Wednesday rolled around and I was about 75% in my own estimation and confident I could contend. However, I needed to discontinue my Rx because they were not allowed in competition. I steadily progressed until about Saturday when I just couldn't get all the fluid out of my chest. None the less, I didn't have a choice, I put it out of my mind and it was time for a race.

Race morning the race conditions were probably some of the best I have ever seen in Madison, a welcome sight in the water and a sharp contrast to last year's chop. Warming up I knew that things weren't quite right when the legs were cramping while just waiting to start. The gun went off and per usual I took things out slow but strong. At about 400m, I typically pick up the pace and try to find a nice line to tack onto the back of the pack. On Sunday though, I found I was a little further back than I wanted and thank goodness for Tami Ritchie who pulled around and towed me up close enough where I could get into the front group. So it worked out, but I will say that it was damn near an 800m TT to get in there. Once in the group, the pace slowed, the rest of the swim was uneventful and we exited in around 52minutes with 2 guys up the road.

Into transition, I again had to stretch out the cramps on the helix, pretty much the worst place to have to stop if you ask me... 10,000 screaming friends, all wondering what the heck I was doing. I resolved things quickly, kept moving and still managed to get onto the bike with 3rd through 8th. The legs felt good at this point, the only problem was that my lungs were not. I don't really know why it wasn't a problem during the swim, but this was definitely different. I watched the world ride for the rest of the ride and simply rode at an effort that the body would allow. The spectators were once again spectacular and I just tried to enjoy the fact that this is going to be my last Ironman Wisconsin (here).

The run was more of the same and though I briefly thought maybe I could run well, reality quickly sank in at about mile 7 or 8.  However this was where the silver lining kicked in. We had one giant BBMC zone out at mile 9/21 which was lead by these ladies, as well as Charlie, Roz, Glenda, Chuck, Justin, Dan, Wynn and a few others. A MASSIVE thank you for the signs and for being out there all day AND night! 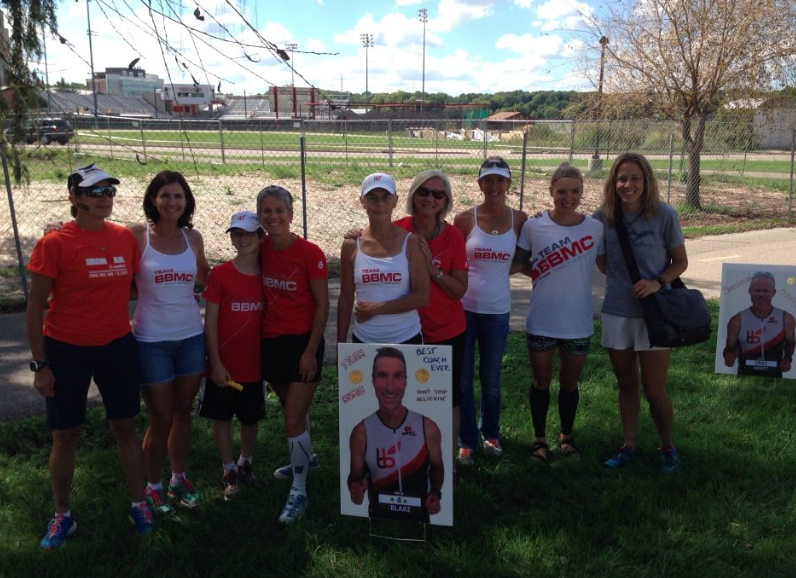 Back to the race, at about mile 12 I saw the first of the other BBMC athletes out racing...huge smiles and all having fantastic days. While I was still disappointed with what wasn't meant to be for me, their races, words and elation in what they were doing, overshadowed much of it.

We had 22 athletes start and 22 athletes finish. We had more PR's than I can count, we had a number of first time finishers and 2 Kona Qualifiers; congrat's to Matt Braaksma for finishing 4th in the 40-44 AG in 9:46 on a tough day for him, as well as John Stuligross for winning the 18-24 age group in a hair over 10hrs. As a coach, today couldn't have been more of a success. 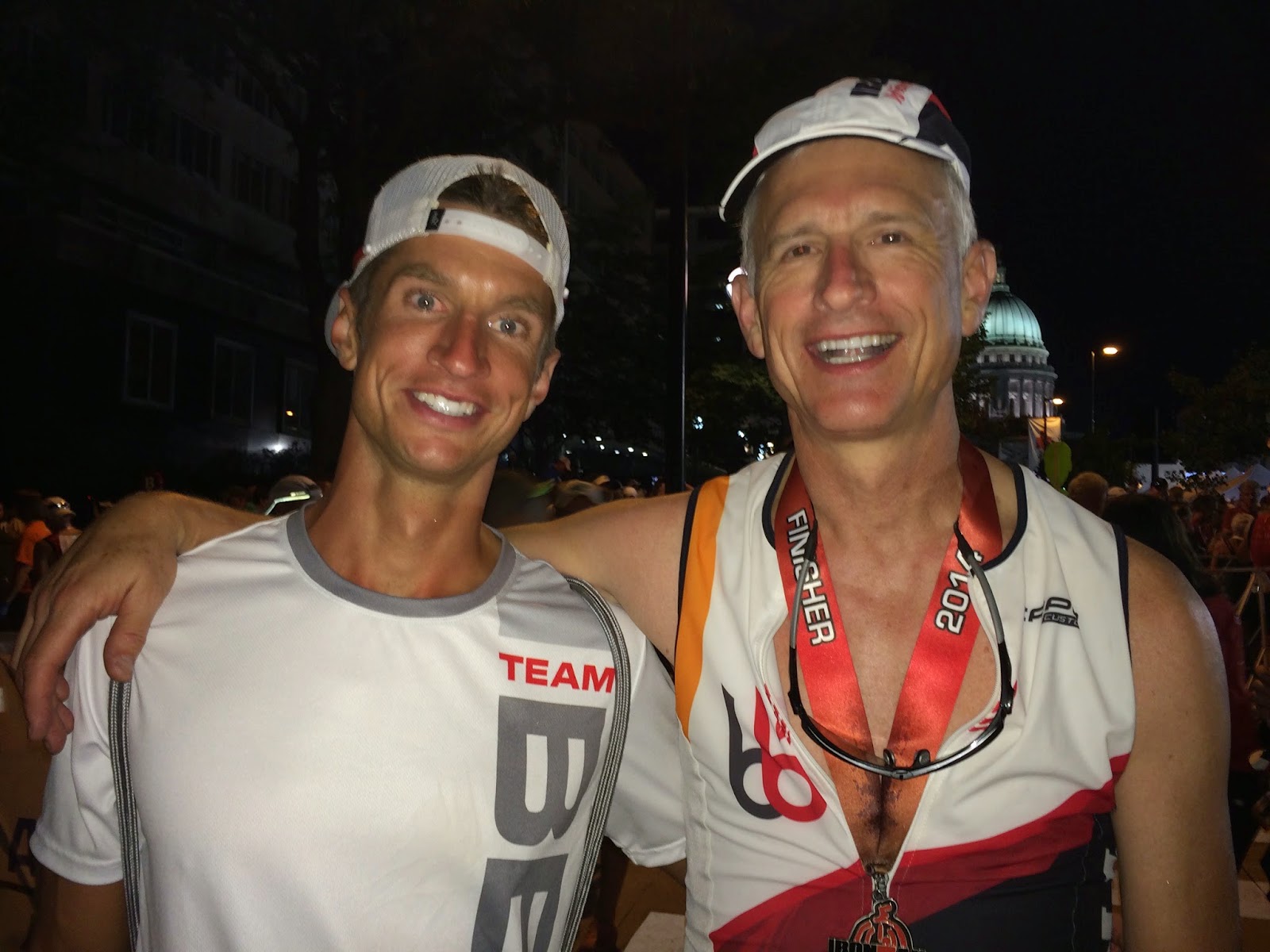 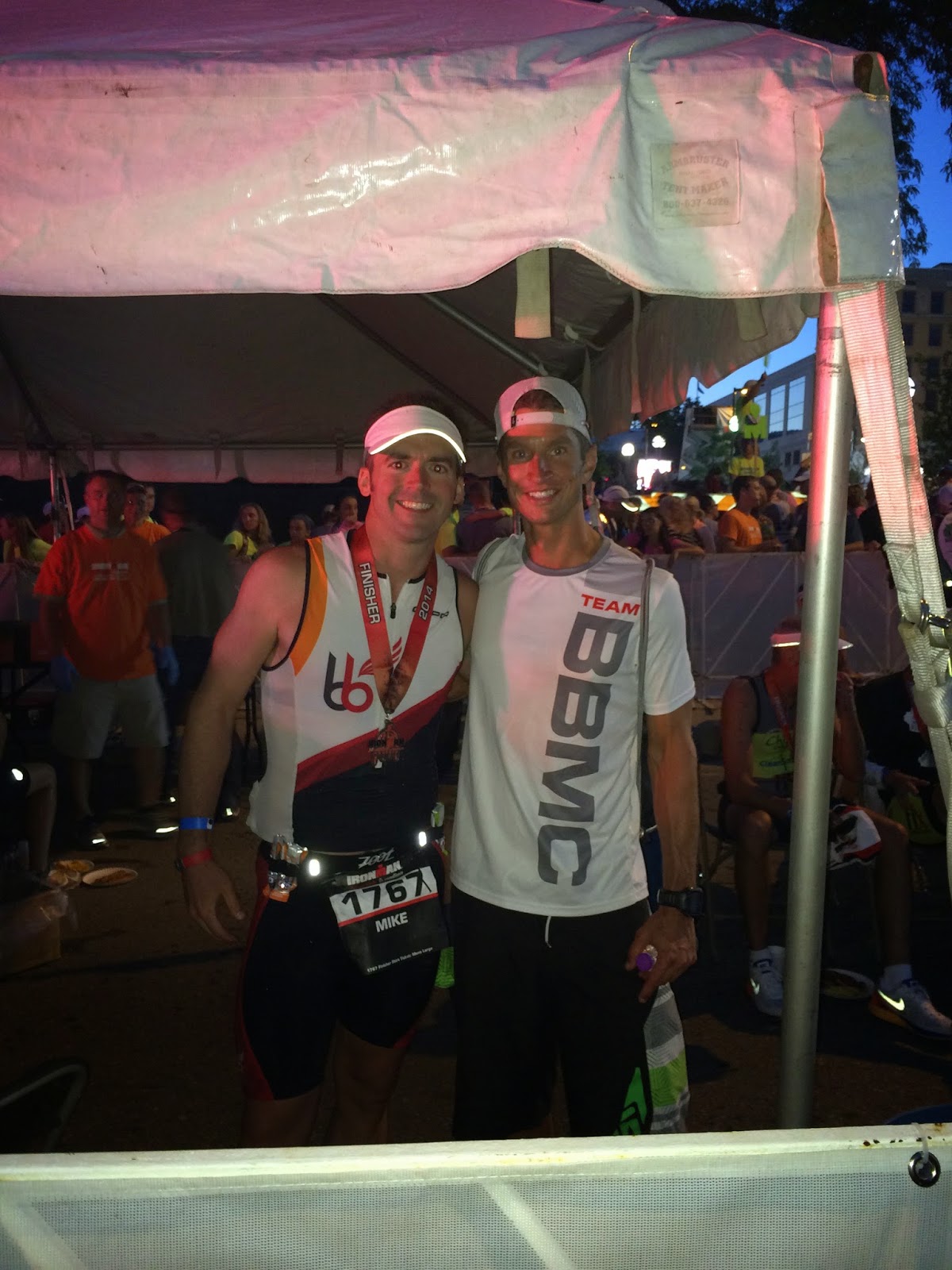 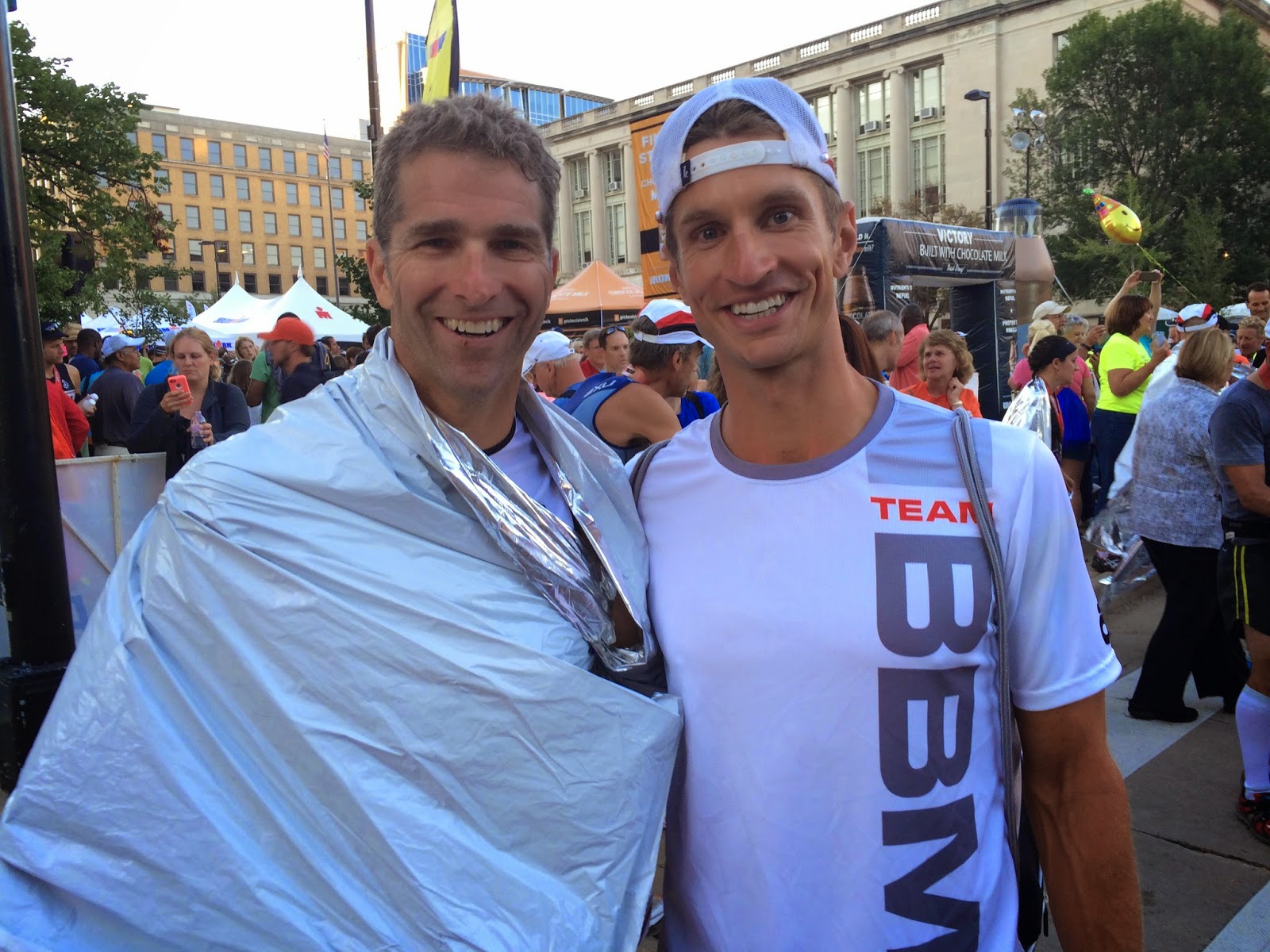 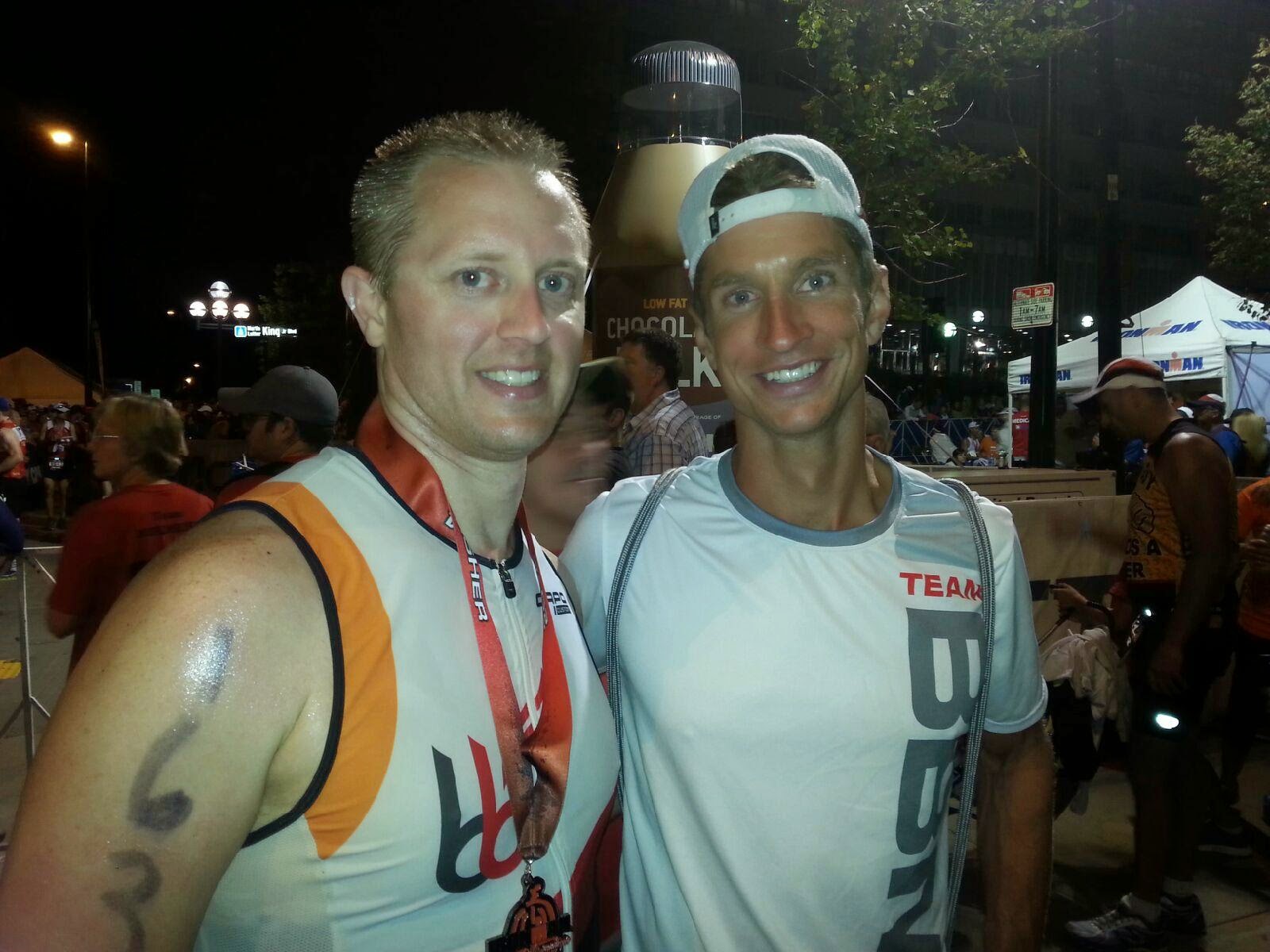 
While we all have goals that we set out to accomplish, some that we train years and even decades to achieve, we have to remember and trust that no matter how hard we work for them, if they are meant to be, they will. The changes to the WTC program forced my hand here and for now, this goal of mine to win Ironman Wisconsin will have to sit on the sidelines. Not worry though, racing for me is not done, I still have some unfinished business out there...

If you have an opinion or will be affected by the changes, I encourage all age groupers, media, local Sports Commission's and marketing teams to voice their opinions to WTC. Tell them how and why it's important to you, for them to keep the Professional division at all their races.

Now it's time for a little R&R and to plan what's next! As always, a massive thank you to my sponsors, my coach, my team, my family who made trips in from around the midwest and this fantastic community. None of this would be possible without your support.

Benny said…
This is simple economics. The online store does not need to pay for the space at the mall, the cache of replica watches uk and the price of presence. So, when you see that replica watches sale at the mall, check its price online before you purchase at the brick and mortar store. So, let's take a look at the five best luxury watch deals that you can find online for this rolex replica sale category for men. This is because their line of watches is elegant, masculine, sporty and priced better than the other brands. Their replica watches sale offered at the mall for over $1,500, can be had over the Christmas season for $850. The Aquaracer is Tag's most powerful product line and simply looks stunning. Tag Heuer also offers their breitling replica at great holiday savings. From the same Aquracer product line, this breitling replica watch has a classic look and feel. It is available right now at a savings of over $1,000.