The 2013 Edition of Ironman Wisconsin 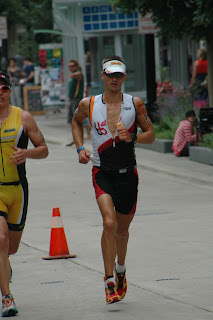 I really can't believe that this was the 12th year that I have raced Ironman Wisconsin. I thought about it in the water before the cannon sounded; some of the first races I did here felt like they were yesterday. Each year proves to be a time when I learn something else that I can apply to future races, with this year being no exception.

Training leading into the race had been good for the most part. I got sick 5 weeks out with cold/flu and it knocked me down pretty good. Training started back terribly, but each week since that time had gotten better and I was confident that the silver lining would be a perfectly timed fitness peak on race day. I thought I could be in the swim pack like I had doing all year, ride slightly better than the past and run a low-mid 2:50's marathon. With some luck, this would be my year to win...sounds simple right?!

Race day rolled around and somehow we sandwiched a cloudy and windy 70* day between two hot and humid 90*+ days. This didn't bode especially well for me, since I tend to like the heat and knew it would have helped knock the uber bikers down a bit.

The swim was probably the toughest of all Ironman Wisconsin races I have done, it could generally be classified as a 76* washing machine. The cannon sounded and I got dropped....by everyone really. I was a bit flat and just stuck to trying to stay relaxed. At the first turn I found myself in the second pack and though I started to feel better, I didn't feel great enough to break away just yet. Once we got to the halfway point of the swim, I started to find my stroke and that in combination with my sleeveless Blue Seventy Helix allowed me to go off the front. I caught 4 more swimmers on the backside and then assessed once I caught the last 2 that I thought were within reach. I knew that we were about 4minutes down on the front and I decided that was fine, so enjoyed the draft in.

I actually used the wetsuit strippers this year and had the fastest first transition of the race in 3:45 to get to my bike only 3:30 down on the front. I got on the bike only to look down and realize I had clipped my shoes into the wrong pedals. My first thought was "SHIT!" My second thought was "How do I fix this without anyone seeing me?" So on the first loop around the helix, I stopped, got off, took my shoes off and put them on my feet, then continued on. This all only took 15-30seconds, but I had a good laugh.

Once onto the bike and out of town, Thomas Gerlach pulled around and asked if I wanted to ride up to the next guy who was just up the road. I agreed and he stepped on the gas, the only problem was that I didn't have any gas. I felt ok, I just didn't have my usual legs. I let him go and focused inward asking myself what the best thing I could do was. I decided to go on a combination of experience, feel and watts. I rode what I thought I could maintain and still run well.  This was tough, because I was losing a lot of time, but I knew it was the best option.

Once at mile 60, the legs started to feel a bit better, especially on the hills, but I still didn't feel comfortable getting too aggressive here; my watts were still low and knew that we'd have a headwind to finish. I kept telling myself that I just wanted to be as even as I could on the bike and could make up time on the marathon. I continued on without too much excitement and finished the bike in 4:59...ok 5:00:07 thanks to my shoe.

I got off the bike and my experience told me that even at 20+minutes down from the front, a good run would move me up into the top 8 or maybe even top 5. I felt very average, but hung onto the slow end of my pace range. I just ticked the miles off and waited to see what would happen. I got to the halfway turnaround at just over 7hrs 30min and was still back in 9th place. About this time, the legs came around like they did on the bike and like the arms did in the water and my PE lined up a bit better with my pace.

I got a split to the last paycheck (6th) at mile 16 and knew I could get there if I maintained pace, maybe even 5th if I pushed. I elected to maintain, so I held back...you never know when the wheels are going to fall off. A few miles later, the gap was coming down, but I had to pick it up a bit to ensure a catch. I pushed at about mile 20 and it was nice to see the pace coming down. 6:30's were pretty much what I was clicking off with a little slowing in aid stations. I caught 7th a few miles later and with a mile left I made a successful charge to pass 6th. "My effort would be rewarded with dollars, yes!"

I ended with the fastest marathon of the day at 2:56, which is solid for this course. I am still learning how hard I can push while staying strong to the end, but a sub 20minute last 5k tells me that perhaps I can push a bit earlier and a bit harder.

Though I ended the day a long way from where I wanted, I can say it was most controlled Ironman I have raced to date and I got the most out of what I thought I could do on the day.

Thank you to everyone who supported me into this one; my great team of athletes who I coach, you have turned into my passion over the last few years, my family for religiously watching this race every year, my friends outside of the sport who somehow understand what I do and my sponsors for helping me get the most out of my training and racing (Trek Bicycles and the Trek Stores of Madison, PowerBar, Blue Seventy and Peak Performance Massage).

Congratulations to everyone who raced, thank you to all the volunteers, Ryan Richards for putting on a great event and the Madison Area Sports Commission for helping keep Ironman in Madison through 2018!

The rest of the year is still up in the air, so stay tuned for more details in the coming weeks.

Summer said…
Great report, Blake. You were too quick for me to make it back to Madison to see, but I enjoyed the updates from your friends and athletes throughout the afternoon. It's great to see all of your efforts pay off with such consistent racing this year, even if that "magic" day hasn't happened yet. It will. As for the rest of your season, my suggestion is to come race a Rev3 event :)
5:21 PM