The 2017 season started strong in Puerto Rico and ended strong at Ironman Louisville. The middle was less than desirable. Ironman Louisville was a race that I had planned on doing all season. This was mostly because I knew I would be training hard for Ironman Wisconsin and I wanted to see if I could carry the fitness for another 5 weeks. This is something that I haven't done very well in the past, however I felt like my strength and maturity as an athlete would allow me to do it this year.

If you haven't been to Louisville to race, you should definitely add it to your list. The river swim, though dirty, is unique and pretty enjoyable. The bike course is VERY rolling with about 5500' of climbing that comes almost all from about mile 15 to 95. It absolutely beautiful with great road surfaces. The run is for the most part flat and ends at Fourth Street Live (downtown area of Lou where they have bands and a number or restaurants). There is plenty of lodging and the city is pretty centralized for most who live east of the Rockies.

The race for me was not my fastest but it was satisfying after getting sick 10 days before racing Ironman Wisconsin. The training that my coach, Cliff English, gave me was more quality focused, which was a great compliment to all the volume we had done throughout the summer. I felt good for pretty much the entire build into the race.

The swim was a bit of a cluster. Our start time was pushed back a few minutes due to darkness and we weren't given any warm-up or warning for the start of the race. I was actually faced the wrong way toggling through the Garmin when the cannon sounded. If there would be one thing I could recommend to WTC it would be to give us 5 minutes to warm-up and line-up, then start us. After all, we are racing for checks!

Even though I was out of position on the swim and missed the front group, I swam a solid tempo and felt pretty good. I wore my PZ4TX speed suit (no wetsuits for the PRO's) with a brand new sleeved top that Borah Teamwear will come out with in 2018. I came out in 55', about 4' back of the pack.

The bike for me was pretty solid. I pushed the first 30 miles pretty hard to try to limit the losses to the front group. Despite the effort, I still lost 90 sec or so. It was at that point that I decided to dial in back and stick to my game plan. The rest of the ride went well...there was a lot of bike traffic on the second loop and we had a FIERCE headwind for the last 30 miles, but I felt like I handled it well.

I got onto the run and I was a bit worked, however my targeted pace was there. Unfortunately it didn't last; I ran well for about 10 miles and then the wheels slowly fell off. This was also about the same time that a massive front came through (note the blue line drop, which is temperature). I think the reason for my fading was probably a combination of things; the first 30 miles of the bike came back to bite a bit, not having any more places to run for and I just think in general it was not my best day of running.

Despite slowing in the last half of the marathon, I still finished 11th in 8:46 and with a smile on my face. I told myself before the race that we never know how many fast races we have in us and that it's important to be grateful. I did that, along with enjoying the day and I am happy with the result. Thank you to all who support me.

Next up for me is TBD. However I still have a few goals in the back of my mind...and if you know me, you know I don't let goals go very easily. More to come soon!

Unknown said…
This comment has been removed by a blog administrator.
5:37 PM

This race is always the highlight of my season and as I progress through the late stages of my Professional racing career, it feels like it means even more when it comes around.
Training had gone very well: I worked hard, but not too hard. I raced well leading in, but didn't race too much. Maybe most importantly, I rested a LOT in the last three weeks before the big day. If there is one thing I have learned, it's that 37 is not the same as 27 or even 32. Recovery is something that seems to be under valued by many high level athletes racing in their late 30's.
This year's race seemed to be wide open. A field of good athletes, but no one who would win on a "B" day. Given my experience, my training and health, I felt good about my chances for possibly a win and for sure a podium.

My mojo was high and the support of the team played a big role in that and always does. Team BBMC had 39 athletes on the st…
Read more 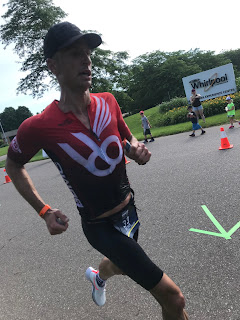 
It's been a while since I have written a race report...and damn it feels good to be back! Injury, illness and life events have all been very frustrating to deal with. Things were up and down and I really wasn't finding enjoyment or success working towards my goals. Additionally, I was too busy to plan my own training properly and I needed to hand off the reigns to someone else.

I reached out to Lance Watson about 5 weeks ago and asked him if he would be interested in working with a vet who wanted to get back on track and stronger than he has been in the past. I have dedicated so many years (almost 2 decades) to racing and coaching, so it goes without saying that it was hard to find someone who I trusted. After a few conversations, I knew he was the coach I needed.

The training leading into Steelhead was not perfect... we assessed maybe 7/10...but being at our best was not the goal. Being healthy, establishing a baseline, sta…
Read more

Injuries are an unfortunate part of sport. You can have a perfect set-up and vision for what the season is going to be like, or how it will go and then the body decides that it isn't on the same page.
That is exactly what happened to me this year. I raced fairly well to start the season and had built some great fitness to start the year off. I PR'd at Ironman Texas, was in a podium position off the bike at Chattanooga 70.3 and was working on my top end through local events, which gave me some time to also focus on coaching and life.
All went well until the beginning of July, which is when I felt like something changed in my performance. It seemed to happen almost over night; my position started to feel uncomfortable, power was not transferring to faster speeds and my usual MO of ride away and run to win was not working. It did give me a chance to work on other skills, but something was off with the bike. I put it off that I was simply tired and was …
Read more