Ironman Wisconsin from a different perspective... 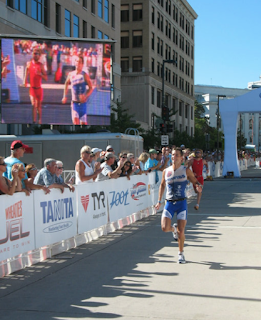 The pic from above was from 2010, when Max Longree and I sprinted it out for 5th place at Ironman Wisconsin. For the record, the only reason I beat max on this day was because he started the swim late due to a wetsuit malfunction.

Outside of my first, the moment above was probably my most memorable from Ironman Wisconsin. It was my first "successful" race across the Ironman distance. I finally broke the 9hr barrier on this course and finished 5th in 8:55. It was my 9th attempt here in Madison and somewhere around my 20th Ironman.

A lot of folks ask me how I feel now that there isn't a Professional Men's race here in Madison for the time being. The race was taken away by the owners of Ironman (World Triathlon Corporation - WTC) in an attempt to consolidate the fields and bring up the level of competition at fewer races. Whether or not it is/has been successful is/has yet to be seen. Either way, I hope I get to race some day again soon.

My personal feelings are a mixed bag and it's definitely bitter sweet as I see the expo starting up. I started triathlon in 2001 and when the Inaugural Ironman Wisconsin was announced in 2002, it was the reason that I got serious about my training. I felt a sense of pride and almost ownership that a race like this was going to take place in my home town. I told myself that I would not only finish the race, but that some day I would win it.

I have spent the better part of the last 15 years trying to do that. This race has been the unwavering motivation that has gotten me through some pretty low spots, ones where I nearly quit the sport several times. I have finished as high as 5th, twice, 6th once and have run one of the fastest marathon's on the course. Last year I felt I was ready to contend, but came down with bronchitis on race week. Needless to say, I have unfinished business that I need to come back to some day if given the chance.

Now, on the other hand, this weekend is filled with just as much excitement and anticipation for the 27 BBMC athletes who will be racing this coming Sunday. I will be able to support all of them, all day, without a race of my own to share my focus.

In addition, seeing the race from a different perspective that I have yet to experience will improve my ability to coach effectively for this race/course and give me a front row seat for the epic races that are going to unfold. We have several first timers, some looking to win and other's just looking for a day filled with fun and their best effort. So though I would love to be out there racing, that's for another day and this weekend is about those who are!