- July 14, 2015
Since I am sharing my full experience here at Challenge Roth, I thought I would give a more detailed race report than I normally would after a bad race. One thing I can say is that Felix and the Challenge Family do things right; from the treatment of the athletes and volunteers, to the food, to the fireworks and all of the smallest details. I can't say thank you enough to them for going beyond what they "have" to do. It really is all about the athletes. 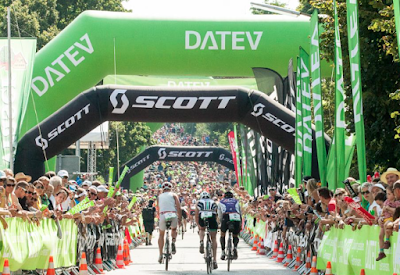 I can assure you that there are as many people as it looks like there are in this picture. The Solar Berg climb was easily one of the most memorable moments in my triathlon racing career.

The race itself for me was Challenging to say the least.

This was my first experience with major jet lag before a big race and next time I think that I would likely do things a little differently in terms of my arrival. 7 days would be a minimum for me, I was definitely not an exception to the rule of 1 day per hour of time change when going from west to east. FWIW - East to west usually takes about half that time.

I elected to start the swim close to shore, instead of closer to the buoy line. The start is narrow (25m) and the faster swimmers seemed to be somewhat split. The swim was a little rough for the first 500-800m, but we were moving along well and I had my own space. At about the 800m mark or so, I started to get really hot and nauseated. The water was borderline wetsuit legal and though I HAD my sleeveless with me, I felt it was important to have some extra speed that full suit brought. In hindsight this was mistake #1. Once over heated, I felt more and more sick as the swim went on and slide further and further back. I simply told myself that things would get better once I got out of the water. I just focused on getting through the rest of the swim and using the 20,000 screaming spectators as motivation!

Out of the water I had both cramps and nausea. I told myself to be smart and just keep focused ahead. I spent an extra 60-90sec in transition to gather myself and stretch things out.

Once onto the bike I knew the worst thing I could do was force things and try to catch the guys in the first 50km, so I eased into the pace. A strong field and 5300' of elevation gain meant that the course would lend itself to over-pacing. By about 40km I could tell this was a good choice and I found a nice little groove as I caught riders ahead.

There was no special needs and I didn't have a person to hand me drink bottles on the course (yes it's allowed here), so I had to rely on the sports drink that was available on course. It was OK in terms of taste, but the stomach didn't feel the same. Despite a bit of the gut rot, the legs continued to feel better as the ride went on. The crowds were amazing; every town had a party with tables, food and plenty of beer. There were an estimated 260,000 spectators on course with a lot of them lining the climb at Solar Berg (which is where the picture above was taken). I held relatively steady, caught about 40 guys on the ride and came off feeling like I could find my groove after a much needed stop in the port-a-loo. I also didn't plan to use the on course sports drink once I was onto the run, which hopefully meant less of an upset stomach.

In T2, I asked the volunteer to hand me all of my nutrition, which was a huge help! I was off but should have done a better job of making sure I had everything. Almost exactly 3minutes down the road I realized I had a major problem---- I had all of my nutrition BUT my salt. $#*!!!! I thought about going back, but it would likely mean 10 extra minutes by the time they found my bag again. So I rolled with the on course sports drink (lower sodium content) and decided to take my chances. I had done bricks without salt and thought that as long as I listened to my body, I could figure it out as I went.

After a quick stop at the first aid station, I felt relatively good and was running down most of the guys between myself and the top 10. At about 14km I started to get forearm cramps, ironically the next aid station down the road had SALT! However this wasn't what I was expecting...it was a tin of sea salt. I decided it was a chance I had to take... at first it seemed like it was working great, the cramps went away and the pace/HR/PE was right where I wanted it. A few more km went by, I passed a few more ahead of me and found myself in 13th place and gaining time. The stomach was OK and I came by the aid station with salt for a second time. I choose to take some more because I didn't know if I would have it again. MISTAKE! I could tell within a few minutes that it was too much....I started to get stomach cramps by about 21km and needed to stop again...from there it got better for a km and then things went the other direction and I found myself unable to run.

While there was frustration that came with not being able to run when the legs felt good, I reminded myself that it was a privilege in many ways to be out there racing in a place that most will never get to experience. It helped. I walked and finished what I started. I also have a desire to come back here and race again for redemption.

Thank you to everyone, including Challenge Roth, BBMC, PowerBar, Trek Store Madison, Sport and Spine Clinic of Madison, Xterra Wetsuits, Catalyst Cycling and Peak Performance Madison. Your support is incredible and I know that I probably wouldn't be able to do what I am doing without you.

Benny said…
The many other rolex replica uk companies that exist often thrive on a limited, knowledgeable client base, and the watches they sell are designed to appeal to this greater horological expertise. Jaeger LeCoultre, for example, test their watches to ensure hublot replica uk and employ the finest craftsmanship to decorate every major component, be it seen or unseen. They also employ master rolex replica sale in the art of engraving and enameling the dials and cases, so that the watch is a work of creative beauty as well as precision accuracy. The replica watches on the other hand, speaks for a more industrious, mechanical mind. The brand's close association with aircraft and the replica watches sale give their watches a technical, specialized look, one distinctive enough to allow for anecdotes. The many watch companies that produce rolex replica sale allow for a wide variety of distinctive styles and functions.