Each season, Ironman Wisconsin is always the race that means the most to me. Though I train hard for every race that I start in, I have so much more vested in this event. I grew up in this city, I have so many who support me here and it really does feel like I have home field advantage. When I started racing Ironman events, 25 races ago, I told myself that one day I would win this race. THAT has been a major reason why I get up each morning and train as hard as I do.

This year was my 11th time racing here at Ironman Wisconsin and everything had gone perfectly leading into the event. I was at life best fitness on the bike and run and thought that this could REALLY be MY year.

The swim started and my plan to go out with race favorite, Ben Hoffman, failed. I just didn't have the gear to go with him over the first 200m. I quickly switched my focus to the main group and slotted in about 1 or 2 swimmers back from the front. I wore a sleeveless wetsuit for the first time in an Ironman and let me tell you, I don't think I will ever swim in full suit again. The range of motion is perfect for me and I tend to like "feeling" the water more. Thank you, TYR and Trek Store Madison for providing me with a great suit. I swam comfortably with the group and exited in a bit over 54min and more importantly with many of the strong guys I wanted to key off of in the race.

As I was heading out to my bike I thought that I dropped my sunglasses it T1. This meant that it was going to be one bright, headache filled ride... "no worries," I thought. This was a race and there is no time to worry about things like that.

Justin Daerr and myself lead the charge out of T1 and quickly made our way up to 4th and 5th on the road.  We were soon joined by Gerlach, Sturla and Goehner, with Hoffman up the road. As we made our way through loop 1, Ben had bridged up to the front of the race and our group had lost about 3 minutes to him.

My legs were not feeling good, but based on training wattage numbers, I knew I was riding well within my ability. I lead the charge into special needs, picked up my bottles, downed my energy drink and immediately didn't feel great.  I thought it would pass, but the legs just didn't respond. I managed to ride with the group until about mile 75, when the thought that these guys could potentially be riding too hard popped into my mind. I thought that they would eventually blow on the run and that I could run them down.

In hindsight, I believe I should have done everything I could have to stay with the group until we turned with the wind. instead of losing 10minutes in the last 35miles, I would have likely lost half that amount of time. Hindsight always 20/20.

The remainder of the ride was not one I want to remember, but I kept pedaling and then my attention shifted to my head. This was partly because of my headache and partly because of something hurting on the top of my head. "Could my glasses actually be stuck inside my helmet?" I thought.

As I rolled into T2 after 4hrs 56min of riding, I was in 10th place and 10minutes down on 2nd place, I took off my helmet and what did I see...my glasses of course! HA...how many Ironman races have I done again?!?! 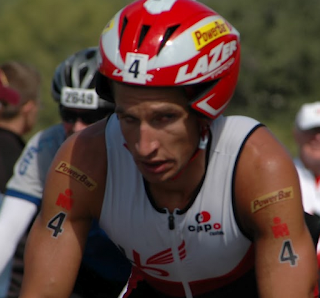 NOT on Straight & NOT Happy

My eyes were SO HAPPY. I started off on the marathon and thought that I could at least run into 5th.  This was the first race in my KSwiss KRuuz 1.5 flats and I have to say that if you can handle the pounding, they are fantastic marathon shoes.

Hoffman was long gone, but podium was possible.  I pushed on, but hit a rough patch around mile 20. I was no longer taking 40sec per mile out of the guys, but still making progress. At mile 22, I saw all of my Team BBMC Athletes cheering hard and it briefly gave me a good boost.  I was 8sec out of 4th and 75sec out of 3rd with 4miles to run. 2nd had started running well again.

That's about as good as it got though. You would think that with someone so close, it would be easy to close the gap, but it doesn't work like that sometimes. Justin started to run a bit better again and I was only holding the gap to 3rd. I got to mile 24 and the splits had gone up a bit. I was now 25sec back of 4th and 80sec out of 3rd. I gave one more focused effort, but at mile 25 I conceded and held my 5th place in to the finish.

With a bit smarter pacing, I think I could have run my way up to 3rd with a 2:54/55 marathon, but I am very happy to finally run under 3hrs on this course and nail my nutrition using a combination of PowerBar products. 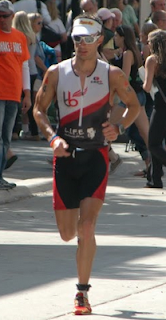 Notice the orange bracelet and L.I.F.E. Logo screened on my kit. This represented Eric McLean, who passed away a bit over a week before the race. Eric has been an inspiration to so many as he fought a losing battle with cancer. After learning of Eric's death, I wanted to make sure that he wasn't forgotten, that his foundation lives on and that all of us remember and know that we are lucky to do what we are able to do. Though it wasn't my day, I am still thrilled to finish 5th and run 2:58. Eric, you gave me a lot of strength out there on course! I will be back next year to give this race another BIG RUN! 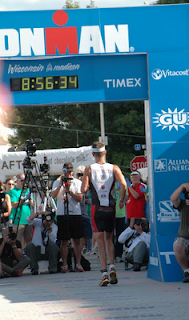 Glad to be done!

Congratulations to all of my athletes who had great day's out there, as well as those athletes who supported us all over the course!!! It's an honor to lead you.

Finally, thanks to all of the support I get from my great sponsors; Trek Store of Madison, who provides me with all of my triathlon gear, including wetsuits, wheels, power meters, helmets and clothing. A big thanks to KSwiss for my racing shoes, PowerBar for all of my training and racing nutrition, as well as Cliff for my coaching!